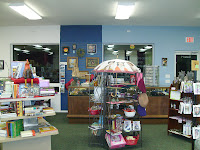 Hard to believe we've been open over a month. It has flown by. The weekend before Christmas, and here we are enjoying the liquid sunshine state and truly appreciating the people that cross our threshold. Saturday (and Sunday) are taste of "'N'awlins" days on which we feature beignets and chicory coffee. The week so far is looking even better than last. We still see 50-75% new people each day, many from our ads, most from word of mouth (friends telling friends) and some from drive by sitings. Many of the new faces are becoming regulars.


We have been ordering books on request, many arriving in two to three days, and expect the service to continue to be in demand.

We dropped the ball on our "crepes and carols" idea - time somehow got away from us. However, we will be breaking in our stage in January and will be posting more detailed information as we have it. Look forward to local artist demos, singer/songwriter area debuts, poetry readings, local musicians .... 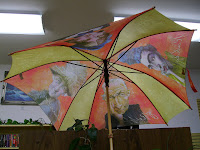 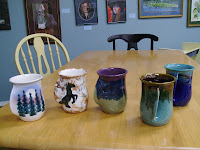 We have exciting things happening all the time. Yesterday our new ad in the South Coast Shopper came out. Locals can check it out to get a little background on where and what we are. We also received our new book shipment yesterday, replacing some fast selling titles (including Stephen Colbert's "I am America (and So Can You)") and adding several more. Today brought more "christmas" as a shipment of beautiful hand-warming mugs arrived - just in time for the winter season on the South Coast - nothing quite like a huggable cup of coffee or tea in a chilling rainstorm. Speaking of rain, we have only two of our special umbrellas left, "women authors", and "women artists".

We have great deals on used books. The hardcover ones (many in like new condition) are on sale - buy two, get the third of equal or lesser value free.

Come in and check out our selection of posters, bumper stickers and pins. Some folk are already calling us the progressive alternative. Heady stuff.

For the food oriented, we always have a delectable and ever changing selection of baked goodies - lemon tea cake, scones, brownies, several varieties of cookies, cinnamon rolls , carrot cake, and, of course, savory and sweet crepes.

It's been a while. We got so wrapped up in getting open and putting on the finishing touches (ordering books, retail items and a new cooker), that we haven't been able to squeeze the time to write a bit. Now's the time. We've added a good selection of fair trade items, including tea cups & sets, drums, coffee, pencils & pens and journals. We also moved in more used books in preparation for a large sale starting tomorrow, and continuing through the end of December. We've ordered more new books to replace those that have sold. Some are so popular, they are on back order, but should arrive early next year, hopefully in time for our Grand Opening 'birthday bash' the first week in January. In addition to a grand opening we'll be celebrating Jessica's birthday (Jan 3-6) - after all it's not just a day, but a season.

Speaking of seasons, we plan to be open on New Year's Day to provide an alternative to the football marathons many will be indulging in, and will be offering exciting sale items. Keep checking in for more details.

I mentioned a new cooker. It is to be dedicated exclusively to gluten free crepes which we will finally be able to offer without fear of gluten contamination (quite possible when using the same cooker for wheat and gluten free).

This is a very exciting time, as we are meeting new and wonderful people, many of whom are networking for us, telling or bringing friends. Last week was better than several months we had at the old location. We have a book reading club which has been active for six years meeting here each week, and expect to have other groups in the near future as the word spreads. We are definitely a happening place, feeding our desire to be a vital part of community growth and interaction.

Our bakery is up and running (early morning - very) producing wonderful smells as well as delectable goodies (croissants, cakes, cookies, bread puddings, brownies, cinnamon rolls and sweet and whole grain breads), and we're always open for suggestions. We consider ourselves a 'grandma' kitchen and are trying to bring back the wonderful memories of grandma's cooking. Have a favorite that you loved as a child? Bring in the recipe or idea and we'll do our best to duplicate it for you. Along that line, we are now offering beignets and chicory coffee on weekends for a little touch of N'awlins on the South Coast. Of course, we still serve up delectable soups (two or three per day), all made from scratch as well as succulent quiche (don't see the quiche on our counter? - be sure to ask for it, as we keep it refrigerated for your protection).

Jerry & Jessica
"tycoonistas"
Posted by Jerry and Jessica at 8:54 PM No comments: