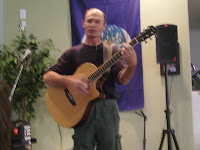 James Hurley put on a wonderful show with his eclectic and humorous songs and facile guitar riffs, keeping the audience on the edge of their chairs. He was very warmly received.

Our first author reading and signing will be this Sunday (June 1st) at 1:30 pm. Xan (Alexandra) Schiller will be reading excerpts from her novel "The Suave Swami", the first of the Mordecai Maccabbee mystery series. Copies will be available for sale and she will be happy to autograph them as well. Xan is a local author from Coquille. Come and embrace her talent.

The third lecture in The "From Ground to Globe" lecture series will be held on Thursday June 5th, and will feature Suzan Brawnlyn speaking on "Community Supported Agriculture".

Friday, June 6th, is first Friday poetry night, and will highlight Doro Reeves, followed by an open Mic session.These nights have been well attended and excellent poetry has been offered, so bring your poems or at least your ears and join the celebration.

Speaking of celebration, Jessica and Jerry will be tying the knot in June on Friday the 13th at 1300 (1 pm) here at Colette's. We will close the store, but open the doors for the ceremony and celebration. All are invited (we look at Colette's as our living room and our customers as guests). As such, all our guests are invited to come celebrate with us.

Also coming in June is The Catalyst - a community gathering place, a new space with meditation and small private meeting rooms for rent. We're real proud of it and we hope you will be too.

Twenty-one questing minds showed up for the second presentation in the "Ground to Globe: Conversations About Food" series we are sponsoring in conjunction with Oregon Coast Community Action. Zoe Bradbury of Abby's Greens in Langlois gave a brilliant and very informative presentation on "Building a Strong Regional Food System". I (Jessica) took 22 pages of notes including some pithy quotes. Of course, at the end of the night while shutting down my computer I hit the wrong button and erased everything. Sigh. I do intend to email her for a copy of her powerpoint, and interview her for an article, but until then, here's a sampling based on my memory.

Food travels an average of 1500 miles before it gets to our table. Where communities and regions have a local food system, food only travels an average of 45 miles to the table.
....only 8.5 percent of the US population are farmers and the number is shrinking every year. Current farmers have an average age in the early 50s. The few younger folks who want to be farmers find it difficult to get into due to financing, lack of access to land and knowledge. "You can't learn farming from books, you have to experience it," said Zoe.

Zoe said the Farm Policy is "like an elephant in stilletto heels" big and bloated at the top with all the pressure on the family farmers at the bottom. The 'bigger is better' push came from Earl Butz, Secretary of Agriculture under President Reagan who believed that farmers should plant from fence to fence creating a surplus that could be sent overseas. "Get big or get out." Subsidies became the norm during this time.

Now, at the same time small family owned farms are going out of business, we have numerous millionaires living in Manhattan (and other places such as wherever Ted Turner lives) with no connection to the land or to farming, yet they are raking in the bucks from subsidies. The land they own is merely a route to government handouts.

Leaving fairness aside, this system does nothing to ease issues of hunger and, in fact, is directly linked to some of the food issues we hear about on a regular basis. For instance, the increase in growing corn (or forcing other countries to grow corn that we can export for fuel) has resulted in people in Mexico not being able to get tortillas - a staple of the Mexican diet.

This system of large farms and rampant subsidies is contrary to what the government knows to be best for farms and the surrounding communities based on their own information. Sometime in the 70's (if I recollect correctly) A sociologist was commissioned by the government to do a study between two farming communities in California...one was a community surrounded by small family owned farms and the other was an agribiz town. While it might be easy to assume that, of course, the larger, more professional ag town would be a better place to live, in fact by all measurements, the opposite was true. The corporate town had (by far) fewer schools, fewer playgrounds, far fewer independent retail establishments and I forget what the others were, but it was very compelling. When the results were presented to the Government, they were buried and the sociologist was let go.

Zoe also talked about the pressure put on farmers by Monsanto, godfather of Genetically Modified foods. "It's very like the mafioso," she said. One of the problems with GMO crops is 'blow over' meaning the pollen etc, crosses fence lines and travels where it will, sometimes landing in an organic field or a non-GMO field. Monsanto reps then gather soil samples from the corrupted field and take legal action against the farmer for 'stealing', when he or she couldn't have stopped the contamination in any way, shape, or form. These same reps also put a great deal of pressure on farmers to use GMO seeds.

The post presentation discussion centered around issues of connection, education, consumer demand and community collaboration. Folks mentioned the need for directories, both for the consumer to locate the food and for the farmer to locate the supplies needed to produce. There was interest in bringing back the idea of small gardens in available space, community gardens, and other growing spaces. Conversation was lively and continued long after the program.

The next conversation in the series will cover Community Supported Agriculture and is scheduled for Thursday June 5th at 6pm. 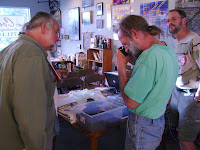 Mark Sturgess's presentation "Healthy Soil Makes Healthy Food" was well attended, and he and his good versus soil demonstration held people even after he was done speaking. The next lecture in our series is Zoe Ida Bradbury, speaking on "Building Regional Food Systems". She will be speaking at 6 pm, Wednesday, May 21 at Colette's - 3229 Broadway Ste H, North Bend OR.

Saturday will be the fifth in our singer/songwriter series, featuring James Hurley, who traded rodeo for a guitar and music. He has a beautiful voice, and we expect a wonderful show to rival the first four in our series. The performance starts at 7:30 pm and Saturday, May 24. Door charge will be $10, which will all go to the artist. Come enjoy the festivities. 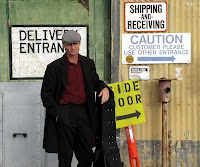 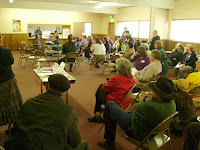 The local foods community forum on May 12th drew over seventy people from a wide variety of backgrounds and interests. Most of them actively participated in the workshop sessions, and would like to see on going functions in a like vein. The forum leads well into a series of lectures that Colette's: Good Food + Hungry Minds is collaborating with the Oregon Community Action's South Coast Food Share to present.
Ground to Globe: Conversations about Food will kick off at 6 pm on Thursday, May 15 at Colette's: Good Food + Hungry Minds . Mark Sturges of EcoSystems will be speaking about how taking care to make great soil makes plants healthier with fewer pest problems. "Nothing happens until the beetles come," says Mark. He's made both a study and a practice of bringing 'good bugs' back to barren soil, reclaiming pasture land and showing folks how to create 'living' compost. Once the beetles begin the decomposition process, then other beetles, worms and small critters come back to the soil. Each has a part to play in creating and keeping a good eco-balance for a healthy soil. Come hear how you can do the same. Mark has promised some show and tell with a high powered scope and a microscope so we can all SEE the difference between the dead and the living when it comes to soil and compost. Do your plants and yourself a favor and pick up some tips. Remember, Healthy Plants can only come from Healthy Soil.
This is the first lecture in Ground to Globe: Conversations about Food- a collaborative effort between Colette’s: Good Food + Hungry Minds and Oregon Community Action’s South Coast Food Share.
Next: Zoe Bradbury of Abby’s Greens on Building a Regional Food System
Wednesday, 21 May @6-8 pm at Colette’s: Good Food Hungry Minds
James Hurley - A man, a guitar, and “a voice that can melt your heart”
7:30pm (photo on right).
Saturday, May 24
Door: $10
(all money goes to musician)
"Americana on the rocks with a twist”- Blues and Jazz flavors with a little Folk and Rock thrown in for good measure.
After retiring from the rodeo circuit and playing in many bands, Hurley decided to pick up his guitar and go solo. “Performing live is where the magic is. There’s a thing that happens when you’re performing that reveals the commonalities of the human experience,” says Hurley. His audiences range in age from teens to those in their 80s, and Hurley says they seem to share certain qualities. “They tend to be people that look deeper than the surface. They also seem to be pretty positive people. When I talk to folks at shows they’re generally aware of the world around them and many are trying to affect it in a positive way….they also have excellent taste in music!”
Jerry and Jessica
"tycoonistas"

Posted by Jerry and Jessica at 3:29 PM No comments: 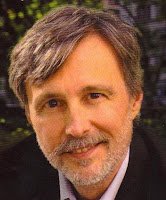 Friday was the fourth in our First Friday Poetry series. Dave Lunde was entertaining and informative, reading from his translations of medieval poetry (French and English), and explaining his methods. The open mic session was fun as well.
Saturday, we went to the Democratic annual recognition dinner with featured speaker Thom Hartmann. It was great for networking, and we got a lot of thank yous for providing cookies for the dinner. Thom's speech was excellent, and the one point which really stood out to me was his statement that the war in Iraq is over, but the occupation is ongoing, and needs to be ended as well. "Historically occupation has never worked". He also mentioned that it is critical that however the primary turns out, the also-ran get fully behind the "winner" to keep the party together and strong enough to have a good shot in November. His major point was that we must have reconciliation and healing in the U.S.
On the store front, we have only one copy each of "Chainsaws, a History" and "Milestones - International Harvester, McCormick, Navistar - In the company that helped Build America" left. Both are now on sale for 25% off the retail price. Great for the men in your life - grampa, dad, uncle, spouse .... Detailed color plates.
Jerry and Jessica
"tycoonistas"
Posted by Jerry and Jessica at 9:43 AM No comments: