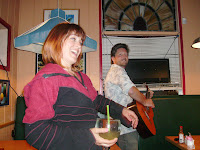 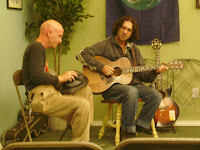 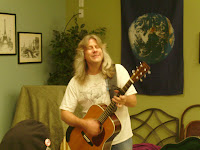 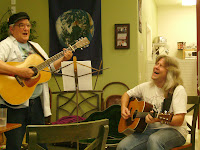 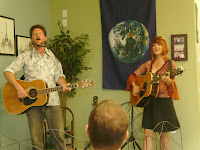 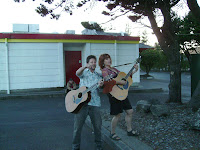 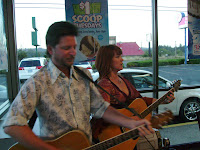 George Mann and Harry Stamper (pics 3&4) set the tone for the week, putting on a great show while having a lot of fun doing it.
Friday saw Adam +Kris on our stage (pic 5). The audience was a bit sparse, likely due to the music festival, so they took it "on the road" with impromptu performances at McDonald's (pic 6), Baskin-Robbins(pic 7) and La Costa (pic 1). Rafael, the owner of La Costa serenaded back. Afterward we went back for dinner, and traded music until quite late. Goes to show that happenings at Colette's tend to be anything but dull. We finished out the week with Chris Chandler, performance poet, and Paul Benoit, blues guitarist (pic 2) on Saturday.

Upcoming events! - Saturday (7/26) Rod MacDonald, a singer/songwriter currently from Florida will bring his "captivating love songs and deliciously tongue-in-cheek political and social commentaries to our stage. Door fee is $10, with all monies going to the musician.

Sunday we're holding a Launch the Catalyst community party/open house from 1 to 5 pm. Colette's will provide food and beverages. Help us fill the space with community energy ($5 per person to eat). The Catalyst houses a meditation room, metaphysical store and meeting rooms available for rent (more private than Colette's yet with the same great food available.
Monday will be the 8th session in our ground to globe lecture series on food. Alex Bourdigu of Porta will be speaking at 6 pm on the use of local food in local restaurants.
Jerry and Jessica
"tycoonistas"
Thursday (7/31) will be the final regularly scheduled lecture in the ground to globe series. This is the only one that will not be held at Colette's and is also at an earlier time (4-6 pm). It will be at the Oregon Coast Culinary Institute on the SOCC campus.
Friday (8/1) will be our next First Friday Poetry Night from 6 to 8 pm.
Posted by Jerry and Jessica at 4:05 PM No comments: 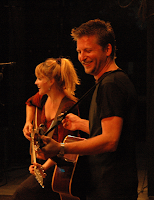 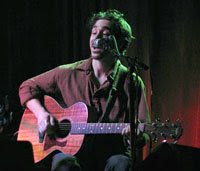 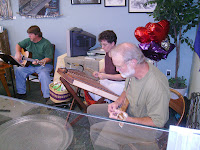 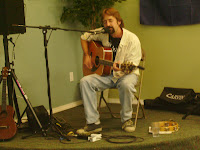 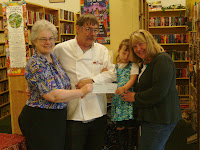 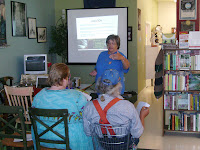 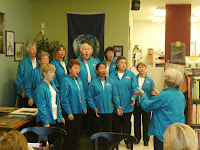 I've been a bit remiss about keeping up with the blog. May still be a bit "twitterpated" from my honeymoon.

However, things are still happening, in spite of me not keeping up. We had a surprise pickup practice / performance by the Bumbling Buskers (pic #3), playing a fine selection of Celtic and bluegrass on hammer dulcimer, mandolin, guitar, ukulele with flute and penny whistle.

Michael's concert (pic #5)was wonderful, and the audience interplay was quite entertaining. We have yet to be disappointed in the performers who have graced our stage and are eagerly awaiting the next ones (four in July).

We had he opportunity to present a Literacy award check to the SWOCC Family Center on behalf of the Pacific Northwest Booksellers Association for $300 (pic #6). This is a matching grant for the $300 plus in books that Colette's donated to the Family Center in February of 2008. With the book donation as well as book donations form other local organizations, the Family Center was able to assemble over 60 Literacy back packs for the OWL WINGS to literacy program. Accepting the check were Leanna Olson and Ashley Caldera, representing the children who will benefit, as the money will be used to purchase material for more backpacks. Colette's donated over 10,000 books to local charities and non-profits during the months of February and March. Jessica, co-owner and tycoonista is fond of quoting the famous French author Colette "Real poverty is a lack of books".

Our Ground to Globe lecture series continued with Anne Weure, Master Gardener, (pic #7)enlightening us on winter gardening. She covered season extending techniques as well as varieties of plants that thrive in cooler weather.

The monthly art walk ( 2nd Thursday of the month) became a celebration when the Sweet Adeline Barbershop Chorus graced our stage. Their wonderful harmony and cheerful camaraderie capped off a beautiful day. (pic#8)

I mentioned four upcoming concerts, and want to take a moment to push the first, a new monthly participation program we have the honor to present. On the second Sunday of each month there will be a sing-a-long session from 4 - 6 pm with the local folk society. Come enjoy the fun!

Thursday the 17th at is the next lecture in the Ground to Globe Lecture series. It features Ann Vileisis, local author of Kitchen Literacy - How We Lost Knowledge of Where Food Comes from and Why We Need to Get It Back. Copies of her book will be available, so in a sense it will be an author signing as well.

The third concert this month will be on Thursday June 18, featuring Adam + Kris, (pic #2) a Nationally acclaimed acoustic duo. "Adam + Kris have been performing together forever. They have toured across the United States and Canada, playing their original music at concerts and festivals. Adam + Kris are regulars at The Oregon Country Fair and The Kerrville Folk Festival in Texas, and have also played The High Sierra Music Festival, Mission Folk Festival, Park City Arts Festival and many others. They have been honored for their songwriting and performing talents by the National Academy of Songwriters in Los Angeles, Music Connection magazine, and Performing Songwriter magazine, to name but a few. They have released five recordings, and have shared the stage with Dave Carter and Tracy Grammer, Caroline Aiken, Chris Chandler and Anne Feeney, Cheryl Wheeler, Bob Wiseman, Carmaig DeForest, Laura Love, Austin Lounge Lizards, Leftover Salmon, The Asylum Street Spankers, Peter Yarrow, and countless others. They are currently based in Portland Oregon and are working on their next release."

Our fourth concert of the month and week features Chris Chandler (pic #1)and Paul Benoit (pic #4) in a repeat performance on our stage. This one happens on Friday July 19th at 7:30.

"Chris Chandler has performed and recorded with a myriad of artists including Dar Williams,Dan Bern, The Austin Lounge Lizards, Peter, Paul and Mary, Chuck Brodsky, Summer Droit, Katie Curtis and more.
His shows are filled with topical, political and social commentary and his songs are forever capturing the elusive metaphor in an often humorous manner. Catch a Chris Chandler show near You, you'll be glad you did! "

"For the past twenty years, Paul Benoit has performed and recorded his own music and collaborated with numerous songwriters including Dan Bern, Reggie Garrett, Eric Apoe, and Laura Love. From 1996-98 Paul’s electric/acoustic roots rock band Crosseyed released two albums and toured successfully throughout the western U.S. In 1997, Paul co-founded Hanuman, a four piece all-acoustic instrumental ensemble blending jazz, bluegrass, country and rock'n'roll with African beats. Hanuman released five albums, sold over 8,000 recordings and toured the U.S., playing at clubs, festivals, and theaters, up to 200 dates a year. In 2001, the band received Best Touring Band and Best Album awards from Sounds of Seattle and was voted best new band by the Seattle Weekly.
Paul’s songwriting and sound continues to evolve with his solo work including the roots-rock-pop blend of 2002’s “Dopamine” and the lush and complex arrangements of his most recent CD, “Combustible,” named a top-12 DIY CD in Performing Songwriter Magazine. He recently composed the soundtrack to the film “Diggers,” which won the IFP/Seattle Spotlight award and premiered at the 2007 Seattle Intenational Film Festival. Paul has just released his 3rd solo CD, Lazy Eye, a collection of 10 new songs recorded primarily with acoustic guitar and band. He continues to perform throughout the United States and Latin America, both solo and with his band, and with performance poet Chris Chandler."

Our newsletter will be going out tonight. If you are not on our mailing list (e-mail), please let us know, so we may add you.

Posted by Jerry and Jessica at 6:03 PM No comments: