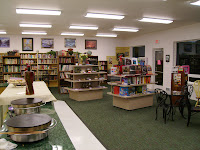 We decided to close for Thanksgiving and have a dinner with friends without plans. It was great fun and quite relaxing. We opened on Sunday, a quiet but good day. Tuesday, we had the best day we've had in a couple of months. Tomorrow we're back to our regular schedule, opening at 6 am (coming in at 4am to start baking).
We have shelves of new books, and our new books are on display. More are on the way. Our berets are here, in many colors, all quite chic. Take one home and transform your personality. Be creative. Be revolutionary. Be an artiste. Nothing changes your life like the simple act of donning a beret.
Keep checking in as we add more gift items to our display, including gift mugs of famous artists, writers, and composers, very cool umbrellas and journals that make you want to pick up your pen and fill them with personal revelations.
We are very pleased to be carrying lavender products from Sherri Merritt of Merritt Farm in Bandon. We have soaps, flavored vinegars, seasonings and dried lavender for cooking. Of course, we also have The Lavender Lady Cooks cookbook for those of you looking for more yummy ways to use lavender in your cooking. And just in time for the holidays, we have several on Sherri's unique and lovely wreaths made of lavender and hydrangeas. Truly beautiful and different.
In keeping with our intention to support local artists, we are currently paintings and drawings by Curt Hitch, paintings and watercolors by Joan Goodman-Fox, and paintings by Chisum Lucas. We also have beautiful note card prints of the Lucas paintings. We've recently added several unique turned wood pieces by Rick Fox, who will also be bringing us some of his fine functional bowls. All but one of the pieces (a painting by Joan Goodman-Fox) are for sale.
When you're in the neighborhood, stop by and say "Hi!". We're always cooking up new things for you, including soups, quiche and delicious baked goods.
Jerry and Jessica
"tycoonistas"
Posted by Jerry and Jessica at 9:08 PM No comments:

Our sign is up and we're officially telling the world 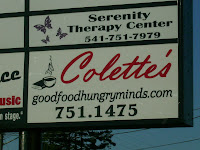 we have arrived. Okay, so we aren't open until Sunday, but it is all coming together. We received our first shipment of new books yesterday. A good portion of our used books will be moved up here this week. And this morning I spoke with Michael Gaither, a wonderful singer/songwriter who is interested in appearing on our stage.

Today is the day for ordering new product. While Jerry continues to build and fine tune the 'hardware' of the store, I will be on the phone and computer. My brother, Matt, will continue to work on building and installing the counters. Many, many thanks to him. He stepped in, pretty much at the last minute, and made our lives enormously easier.

We're amazed at the amount of detail this undertaking involves. Though we expected a lot, we are still surprised at how much there is to do. Last night, we made a 'to do' list of the remaining tasks...it was four pages long. Nevertheless, our excitement continues to grow as we move closer to our opening date.

Posted by Jerry and Jessica at 9:23 AM No comments: 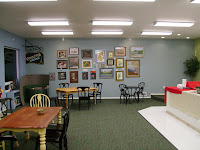 even if you aren't quite ready.

Here's what the store looked like for our 'opening' party Saturday evening, November 10. The white and red splashes seen on the right hand side of the photo were the cloths shrouding our unfinished counters. Thanks to Joanna, Gregory, Matthew, Terri, Darren, Robert, Matt, Brianna, Allen, Charm, Mark, Shane, Curt, John and Madi, we were all dressed up and ready for the party. Special kudos to Brianna, Allen, Joanna and the whole Dirk clan for labor above and beyond.

When the doors opened at 5:13pm, it was gratifying to find a line of folks standing ready to enter. As always, with two cooks in the family, we worried there wouldn't be enough food to feed everyone. And, as usual, we could have fed a small army. We had two kinds of cookies, two quiches, two soups, smoked salmon in spinach crepes, pumpkin bread and muffins along with lemonade and water. Small snafu... we were so busy up to the last minute that we forgot to brew the coffee and when we realized that, we found that the coffee filters were still at the old store. Even that didn't dampen our joy at seeing so many people 'ooh' and 'ahh' over the result of all the work we've put in the past two weeks.

Where are we now? We were planning to scramble and push Sunday and Monday and then open on Tuesday, but clearer heads prevailed. On the advice of a fellow entrepreneur, we've decided to work all week and open officially at 10am on Sunday, November 18th. Instead of spending another 18-hour day working at the store, today we slept in, had a leisurely breakfast, and soaked in a hottub for an hour before reporting to the store. Tomorrow? Well, we'll get cracking again.

Posted by Jerry and Jessica at 7:10 PM No comments: 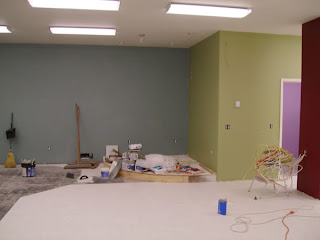 It's 1:13 Sunday morning. Well, since we were supposed to roll the clocks back an hour, it is actually only 12:13 in the morning and I can't sleep. We have exactly 159 hours before we open our doors to the public.
While our vision stays the same, we continually refine how quickly we can make it happen as we run into the inevitable slowdowns and delays that come from not being 24 anymore. It has been humbling to realize that our bodies simply won't let us work as hard as we used too. It is a good thing that our original planning included having a bed in the office for the inevitable napping.
Today is all about finishing the counters and painting: bookshelves, display cases, tables, desks, and slotboard. With any luck, we'll also have time to haul some furniture from our respective houses and get that in place.
We're lucky that my brother agreed to help us pack up and haul the bookstore up to North Bend. He's a good worker and there is no problem leaving the project to him. We can move on to other things knowing that list of things to do is now covered. One of our ongoing issues is finding folks with a work ethic like ours. So many of those we know who qualify have injured themselves and can no longer do the physical work that setting up to open requires.
Today, we'll take more pictures of our progress and get them posted. We're just tickled every time we stop and realize, "Hey, we're opening our own store. We're gonna be tycoonistas." (That's a made-up term we use for 'revolutionary tycoons' as in, doing business as 'unusual'...ensuring as much as possible that our business also makes a positive difference in the community.)

Nearly Midnight of a full day 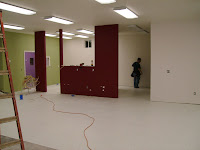 Plumbing is nearly done and just a bit of electrical to take care of. Jerry began the counters today, while I placed our first order for supplies. This weekend is full to the brim with tasks that must be accomplished if we are to meet our opening date. So much to do.

By the end of the day tomorrow, we should have the shelves moved and painted. That leaves Sunday for moving the books. It will be a full weekend. Time to begin counting down to next Saturday, one week from tomorrow.

Halloween is over and November has begun. Ten days 'til our opening and so much to do. Already today the sinks are ripped out of the old store, the fridge has been transported and the tools have been rounded up to finish building counters for the new store.

Last night we handed out approximately 1500 bookmarks and coupons (for a free cookie or cup of coffee) good at our new store. The mall was packed with folks in costume and the energy ran high. It has been a long time since I participated in handing goodies out at Halloween. Wow, there's an amazing sense of entitlement among those with hands outstretched...and often the parents were worse than the children. "What, no candy?" was a frequent refrain. (We gave out pencils til we ran out.)

More exciting to us, than Halloween is the beginning of Nanowrimo. Jerry and I are both signed up to write a 50-thousand word novel in 30 days. If you'd like to give it a shot, just go to nanowrimo.org and sign up. We'll be having at least one write-in a week and a couple of parties at Colette's after we open on November 10. In addition, for those procrastinators, we'll be hosting the count down to midnight party on November 30. Come join us ...it will be a great creative exercise if nothing else.