Has it really been over a month? 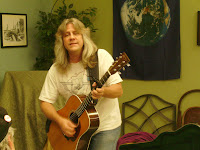 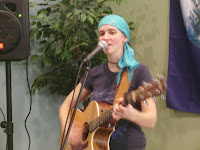 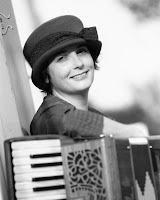 I got a call from my brother a couple days ago to "see if you're still alive", as he hasn't seen any updates to the blog in a while. I have been a bit remiss, blaming it on computer issues at first, then on senior moments, mental fatigue, and life getting in the way. You'd think with as little as I have to say, I could do it more often.

A quick update. We've had three performers since my last burst, Anne Feeney was dynamic, outspoken (as befits a labor organizer), and very well appreciated. Toward the end of the month we were blessed with the appearance of Angela Reed (pic 1) from Seattle, who managed to fit us into her "West Coast Tour". A young lady with an amazing voice and song writing talent. The following week we had a repeat appearance from James Hurley (pic 3), whose eclectic brand of humor in music appeals to a wide audience.

Our second open mic was well attended, and was filmed for public access TV by Don Van Dyke. We had an excellent pianist/ blues singer (yes we have a keyboard thanks to Lynda Cole) as well as several guitarists, a reader, and a stand-up (comic).

Coming this week!! Thursday we will feature a singer song writer form Edmonton, Alberta. Maria Dunn (pic 4) writes and sings folk tunes with a strong sense of her Irish/Scots heritage. "...remarkable singer-songwriter, think of her as a distaff Woody Guthrie." Mike Ross, Edmonton Sun. 'A storyteller through song, Maria Dunn combines North American folk and country music with the influences of her Celtic heritage. Born in Scotland and raised in Ontario and Alberta, she writes songs inspired by historical and contemporary characters, capturing their struggles and triumphs in her lyrics. In 2002, Maria received a Juno nomination in the Roots/Traditional Solo category for her second recording, "For a Song".'

Friday heralds the return of activist George Mann (pics 2 & 5). He will be showing a video of Julius Margolin, who is well into his eighties, and has been a labor activist since he was 16. Before and after the showing George will perform several numbers, and may be persuaded to sing one or more of local writer Harry Stamper's.

Look for our next newsletter next week.